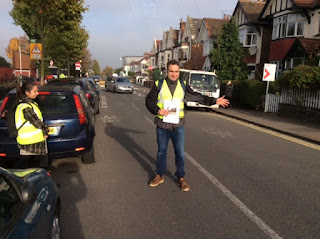 Calls from residents for changes to the lay-out of Pathfield Road to prevent rat-running and parking congestion have been heeded with a commitment from the council to consult on road improvements over the next few months.

Green Party councillor Scott Ainslie has been requesting council officers respond to the problems, which have worsened since the closure of Estreham Road to northbound traffic as part of a Quietways cycle route connecting south Lambeth with central London.


Since the scheme was introduced in October 2016, Pathfield Road has become a 'rat-run' for traffic trying to avoid congestion on Greyhound Lane. Following a six-month trial, the partial closure of Estreham Road closure has now been made permanent and the council has agreed to tackle the knock-on effect on Pathfield Road.


The road, which is very close to Streatham Common station, has also suffered an increase in demand for parking by commuters travelling by train.

Officers have told Scott that the council's road designers will begin working on options to alleviate the problems in February and meet residents to share the plans in early March. The timescale for the consultation would lead to measures being implemented in Pathfield Road by December 2018.

Cllr Ainslie said: "The traffic has been misery for people living in Pathfield Road for the last 16 months. I'm pleased that the council has now listened and is going to tackle the situation I will keep a close eye on the process and do what I can to ensure residents' views are respected and plans progress as quickly and effectively as possible."

Read the timescale for the consultation and impovement works here.
Posted by Chris Holt at 15:13