Fatality at the junction of Mitcham Lane and Ambleside Avenue 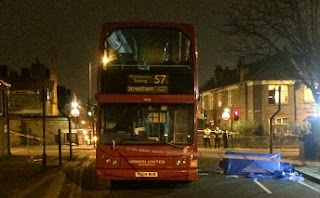 I spoke with police last night about the tragic collision at the junction of Mitcham Lane and Ambleside Avenue. This was the scene.

It must be emphasised that the details are still unclear. However it has been reported that a woman died after being hit by a bus, and the driver was arrested.

We have been campaigning alongside local people since 2012 to make this junction safe, and highlighted how buses have been jumping the lights.

We were told that there would have to be another fatality of serious injury before action was taken.

So we launched a campaign which included a demo with parents and children from St Leonard's Primary School who use the crossing, after a number of near misses on the crossing at the junction. It received some press coverage which you can read here.

However, it then seemed that the Mayor of London was backtracking on his plans to make changes to dangerous junctions, as he scaled down his 'Better Junctions Programme'.

So we continued to push and TfL until they made some promises. Progress has however been delayed by TfL and the Mayor. We have asked for another urgent update and meeting.

Please do show that you want the junction made safer by signing the petition here.


For more on this junction see the following:

A chance to get your questions answered about fly-tipping, dumping and cleaning up Streatham! 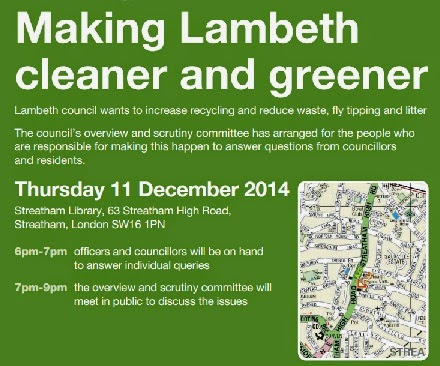 Streatham appears to be in the grip of a fly-tipping and dumping epidemic. Meanwhile the latest annual figures (released last week) show Lambeth Council's recycling rate has fallen below 2006 levels, and Lambeth is sending its waste out of borough for incineration, contributing to deadly air pollution.

Lambeth Council's Overview and Scrutiny Committee is coming to Streatham Library to discuss these and other issues on Thursday 11th December. All residents are able to attend. Officers and councillors will be available from 6.00pm to answer individual questions, before the formal committee proceeding take place between 7.00pm amd 9.00pm.

Posted by Jonathan Bartley at 12:38 No comments:

Leigham Court is an award winning council-run sheltered accommodation in Streatham. It used to have a brilliant garden that was much appreciated by its residents. Now Lambeth Council are neglecting the garden, and campaigners say is part of a plan to run down the site while they prepare to demolish the building and sell the site to property developers.

Volunteers for Lambeth Housing Activists want to clean up the garden as an act of solidarity with all those residents in Leigham Court fighting to save their homes from demolition and who deserve to have their homes maintained properly.

http://saveleighamcourt.wordpress.com
Posted by Jonathan Bartley at 13:12 No comments:

Streatham Action is an active group of local volunteers, who together seek to improve life, work and play in the area. To find out more please visit www.streathamaction.org.uk

If you are interested in
becoming a Streatham Action committee member
please email Anna for a nomination form and send it back to office (at) streathamaction.org.uk by 4pm on Friday 21 November or join us at the AGM and hand in your form to Anna or another Streatham Action representative on the day.
Posted by Jonathan Bartley at 08:21 No comments:

Sometimes you just have to take matters into your own hands...

This morning, I went with Cllr Scott Ainslie to visit a resident on the Nuneham Sheltered Housing Estate at the corner of Garrad's Road and Prentis Road.

Her story was all too familiar. She is a vulnerable resident and Lambeth Council and Lambeth Living have let her down with repairs. She was being ignored, treated abysmally, and living in dreadful conditions because of the Council's neglect, and there was no accountability. 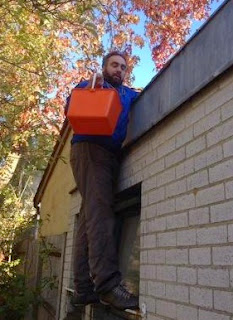 Part of the problem was a leaking roof, and after two botched repairs it was still leaking water into her bathroom. Paint was pealing off the ceiling, and more damage was being done every time it rained, which would cost more and more money to fix. A patch of plaster in the ceiling that had been repaired weeks ago, was still wet to the touch.

We arranged to meet the latest contractor who had been appointed to do the job. He arrived and insisted there was nothing wrong with the roof. He said it was just damp under the felt that needed to dry out after the last repair. He suggested waiting a few more weeks for it to dry out. We said there were drips. He said that there weren't any. So we showed him the drips. He said they came from the wet plaster that we had just pushed. And so we went backwards and forwards with no resolution.

Finally he said he would come back when it was raining again.

There was no way we were going to let him leave and "come back when it was raining". This is exactly the same thing that has been happening in Cressingham Gardens in Tulse Hill with the leaks there. Contractors say they can't see a leak and say they will have to come back when it's raining. And then when it rains, they say they can't go on the roof "for health and safety reasons", and so nothing ever gets done. 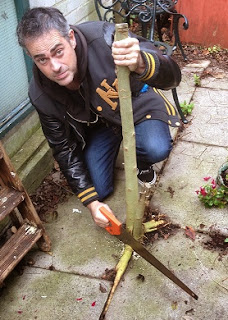 So Scott climbed on the roof and I passed him up buckets of water. Five buckets later, sure enough, the water began to pour down the walls inside. Finally the contractor was convinced, he agreed to go up on the roof and found he leak. He is booked into repair it tomorrow. It shouldn't be this hard. But sometimes you just have to take matters into your own hands to get things done.

But while we were there, we also got rid of some ash trees that were breaking up through her patio at the back, but which Lambeth Council and Lambeth Living said was not their responsibility to clear.

The resident asked us to tell this story.
Posted by Jonathan Bartley at 13:58 No comments:

Further to the campaign to get much-needed funding for Streatham Youth and Community Trust we just received the following message:

I am delighted to let you know that we came first in the Lloyds Community Fund Award and we have won £3,000. I would like to thank you all for your support and votes. Believe me your support made the win possible as we were competing against very good projects.

Just for your information, there were 4691 votes cast and we took 31% of the vote, with the next nearest with 27% and the other two making up the rest. I am pleased with the result because at the half way stage we were in last place! It was your support which really brought us back.

Once again, many thanks for all your support.

We emailed our congratulations and got the following back:

You were our greatest supporter! So yes your tweeting and blogging made a big difference. Thank you so much for that. I would be happy to be quoted for your blog J We also made it down to Streatham Green for the Farmers Market as well.

We need to get you down to the John Corfield Centre on Conyers Road to see our work in action and what your support has achieved.

Once again thanks for your support.

We will certainly be heading down there soon!

Posted by Jonathan Bartley at 16:42 No comments: