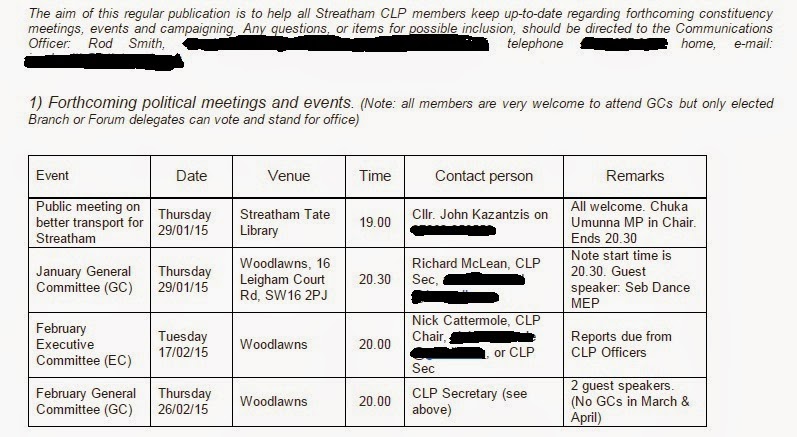 It was confirmed last night that representatives from other political parties have not been invited to sit on the panel for the meeting.  This is despite the clear wishes of local people expressed at the public meeting last year, that improvements to transport in Streatham should be taken forward on a cross-party basis.
Posted by Jonathan Bartley at 10:21 No comments:

After last night's council meeting it came to light that Streatham Hill appears to have been excluded from Streatham's Neighbourhood Enhancement Programme (NEP).  (HT to @shoutstreatham )

Instead the council leader's ward of Thornton has been included.  We are seeking clarification that this is the case, and if so, why.

It has previously been highlighted that the NEP will include money already promised and allocated to Streatham.  If Thornton Ward is now getting a slice of money that should have benefited people in Streatham negatively impacted by the hub development - a lot of local people will feel very upset.

In December we had it confirmed by the Council where the money for the programme is coming from:


"The budget for the Neighbourhood Enhancement Programme (NEP) in Streatham is £800k over two years, comprising £572k LIP funding and the remainder being s.106 developer contributions"

The £572,000 Local Implementation Programme (LIP) funding is money from Transport for London given for the implementation of the London's Mayor's transport strategy. The remaining £228,000 is the Section 106 contributions from the hub development.  On this basis not a penny is coming from Lambeth Council.

You can read about the Section 106 money from the Streatham hub development here.

The latest information (in the picture above) states a figure of £1.2m for Streatham's Neighbourhood enhancement programme.  It implies £200,000 for each ward, as our information in December also confirmed.  But this adds up to £800,000, not £1.2 million.


Posted by Jonathan Bartley at 09:54 No comments:

There was another traffic collision last night on Mitcham Lane, at the junction with Conyers Road and Riggindale Road, outside Streatham Methodist Church.

Thank you to Adrian Gatton, a local resident, who sent us this picture.

I have spoken to police this morning, and have been told that three individuals were in the car which was travelling north along Mitcham Lane.  All had apparently consumed significant amounts of alcohol.  The car came over the bridge and turned over, and hit a couple of pedestrians, and the caught fire.  Police did not know if the car was stolen

There are no fatalities yet reported. However, the three individuals in the car were apparently seriously hurt, and at least one is in intensive care.

Mitcham Lane was closed between Ambleside Avenue and Conyers Road/ Riggindale Road this morning.  Police say they did all they needed to do after the collision last night, and the road was only remaining closed because Lambeth Council had still not arrived.

One lamp post needs to be looked at, and there is small bit of damage to the road surface (all within the bit cordoned off in the picture to the right).

There does not seen to be any reason why the whole road needs to be shut.  This has had a huge knock-on effect on traffic in the area, and means that police have to stay there until council officers arrive to take over.

We are chasing council officers to sort it out.

We are also continuing our long-running campaign to sort out this very dangerous stretch of road.
Posted by Jonathan Bartley at 10:00 No comments:

We have just received notice that Transport for London (TfL) is about to start major work on Streatham High Road from Monday, that will go on to the end of March.

Lambeth Council apparently know about it, but (once again) this appears to be the first time that many local people have been told about it.

TfL has appointed ConwayAecom to carry out the 'footway improvement works' on the High Road, between the junctions with Hopton Road and Streatham Common South.

The works area is shown on the location map below. 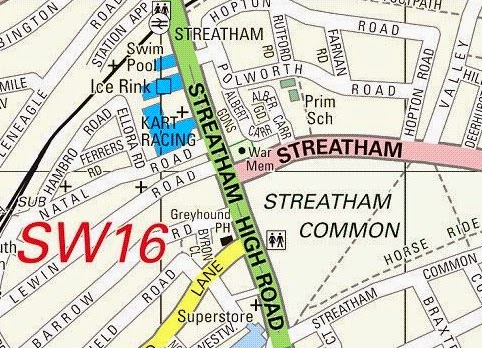 The objective is to renew the footway on this stretch and upgrade the crossing area on Streatham Common South (parkside).  It's part of TfL's Road Modernisation Plan

The works will start on Monday 26 January and are due to continue to Tuesday 31 March 2015.

The working hours will be between 08:00 and 18:00 for weekday footway works "with no obstruction to the carriageway".

Works that require lane closures on the carriageway are programmed to be undertaken between 22:00 and 05:00 on weekdays "to avoid major traffic disruptions, due to these stretches being a pinch point for traffic during the day". All noisy works during this period would be restricted to finish at 00:00.

TfL say "a certain level of disruption is inevitable",

Please let us know if you are a local resident and you have been told about it.  Please also let us know if this impacts you in any way once the work begins, and we will do all we can to help.

We want to make Streatham the most cycle-friendly place in London, and we asked Transport for London to clarify the route for the proposed new Waterloo to Clapham (via Clapham Common) Quietway, which will go through Tooting and Streatham.  (For more info on Quietways see here)

We have received the following response with a map:


The proposed route for the Waterloo to Clapham (via Clapham Common) Quietway is as follows: 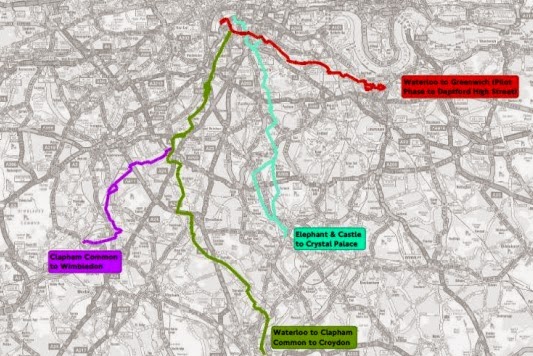 Posted by Jonathan Bartley at 16:10 2 comments:

It was great to see the final trees go in our Streatham High Road today, which was the culmination of several years of campaigning and lobbying to get more greenery.

Not only will it improve the look of the High Road, but also help to tackle the air pollution.

There was a time, when it seemed that there would be no trees going in at all!

Great credit should go to groups like Transition Streatham, who we worked with, along with TfL and the Council, on the species selection and getting as many trees as possible put in as part of the central reservation project.

Thanks too to John Parker at Transport for London, who was a great help, and a mine of useful information over several years.

Here are a few links giving the background to the central reservation project:

Posted by Jonathan Bartley at 00:19 No comments:

We went up to City Hall this morning with Green London Assembly Member Darren Johnson, to present our petition to Transport for London, calling for the junction of Ambleside Avenue and Mitcham Lane to be made safe.

This is a long-running campaign, following three fatalities (the latest of which happened before Christmas) and numerous collisions there.

There is a nursery right there on the junction and St Leonard's Primary School is a hundred yards away.

Thanks to the 850 local people who signed the petition online and on paper.  We collected signatures at Streatham Green market when we ran our Christmas street stall. Local shops also helped out as well as Tenderlinks Day Nursery.

For more on this junction see the following:

Posted by Jonathan Bartley at 13:03 No comments: 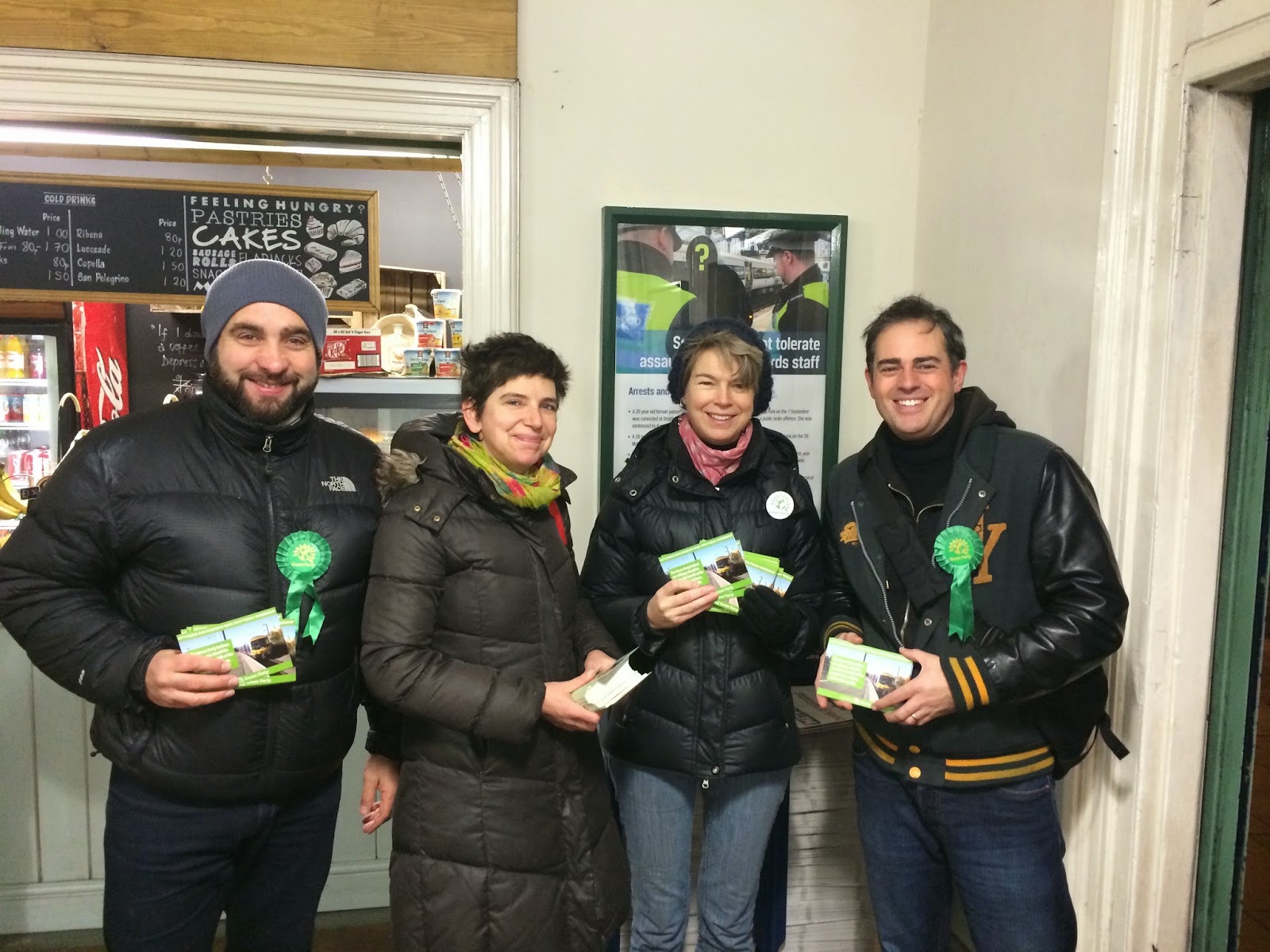 Greens were bright and early this morning (a little bleary eyed!) at Streatham's three railway stations - Streatham, Streatham Common and Streatham Hill (as well as Brixton) letting people know about Green Party proposals for lowering fairs and getting much needed investment in our railways.  You can read more about the proposals here.

This was part of a London-wide day of action  calling for the railways to be brought back into public hands.   Green MP Caroline Lucas will be presenting a bill in the House of Commons this week in support of this,
Posted by Jonathan Bartley at 08:59 No comments: