Residents win campaign to save their sheltered housing from demolition

Elderly residents of Macintosh Court sheltered housing in Leigham Court Road, Streatham, have won the campaign to save their homes from demolition.

Lambeth Council had planned to demolish 45 flats and sell the land for development - along with another sheltered housing estate, Queenswood Court, in Gipsy Hill. Residents of both estates have been told this month their homes will be saved - and refurbished instead.

The announcement came three days after the Green Party came within 36 votes of winning Gipsy Hill ward from Labour in a council by-election.

"Three and a half years of stress and worry are now over," said 66-year-old Deidre Shaw, who helped lead the campaign against demolition. "It's a great relief, but we've kept going and refused to take No for an answer."

The campaign to save Macintosh Court - previously called 269 Leigham Court Road - was supported by Streatham's Green Party councillor Scott Ainslie and its original architect Kate Macintosh, together with organisations including Architects for Social Housing, the 20th Century Society, Open-City, and Docomo Inernational.

"Scott's support has been a morale-booster. And to have qualified, informed, like-minded people supporting us has been amazing," said Deidre.

A key factor in the residents' success was securing Grade II listed building status for Macintosh Court, which is a rare example of 1970s "Brutalist" arrchitecture in a domestic setting.

Ironically, neglect by Lambeth Council over several decades, may have contributed too the listing by English Heritage in 2015; none of the estates' original features, such as wooden window frames, had been replaced.

In its letter to residents, Lambeth says its change of heart was due to revised estimates of the number of older people living in the south of the borough, inability to find a suitable site in Streatham to develop an "extra care" scheme, and the listed building status of Macintosh Court.

The recommendation to refurbish instead of demolish is due for approval by Lambeth Council's Cabinet on 11th July.

"It's not over yet," says Deidre, hugging her beloved cat Poppy. "If Lambeth ratify the decision on 11th July, then we'll allow ourselves to breathe a sigh of relief."

In 2013 The Green Party's Scott Ainslie and Jonathan Bartley helped save The Glebe sheltered housing from demolition.

PUBLIC MEETING - HOW TO BRING CROSSRAIL 2 TO STREATHAM: 7PM, 29 JUNE, AT HIDEAWAY 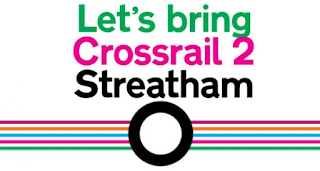 Streatham Action brings together a panel of experts and influencers on Wednesday to share what they believe are next steps needed to bring Crossrail 2 to Streatham.

All are welcome to attend and ask questions at the public meeting at The Hideaway, 7pm June 29th. The panel, which will be chaired by journalist and transport expert Christian Wolmar, comprises:
This is a good opportunity to highlight the desperate transport infrastructure needs for Streatham. There will be a chance to explore how a CR2 station at Streatham could help reduce traffic and pollution on the dangerous A23, and alleviate overcrowding on the Northern line and Victoria Line.

We'll also hear how Crossrail 2 can facilitate transport links to Gatwick via what will then be a new transport hub for south London at Streatham.

The bulk of the meeting will be taken up by answering questions from the floor and receiving responses from the panel members to comments received in advance from local residents on the Streatham Action website.