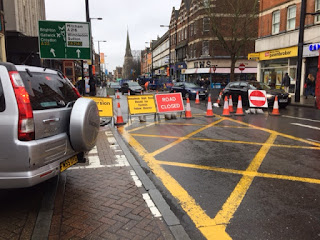 News that the long-awaited improvements to St Leonard's Junction are to go ahead in February has come just as motorists are dealing with the nightmare of emergency sewer repairs closing the southbound A23 between Prentis Road and Shrubbery Road.

Green councillor Scott Ainslie, has been in direct contact with senior Transport for London managers to alert them to the need for traffic to diverted to avoid the gridlock in the centre of Streatham, which may continue for two weeks as Thames Water dig down to repair a sewer 5 metres below the road.

On Saturday surrounding streets were in chaos as heavy traffic tried to find alternative routes to the A23.

Traffic disruption will continue into February and March as TfL plan to begin work on a re-design of nearby St Leonard's junction. 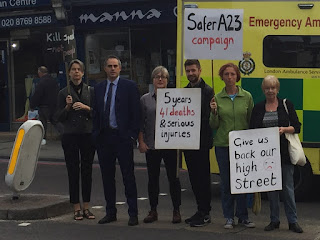 Following a long campaign by road safety campaigners, a new timed pedestrian crossing is to be created at the junction of Streatham High Road and Mitcham Lane. The existing crossing north of Gleneldon Road is to be removed and a new bus lane created in Tooting Bec Gardens.

For decades the junction has been a major hazard for local people - with , 22 collisions, incuding two tragic fatalities in just the last four years.

Read more:
Collisions increase on A23 through Streatham
Sister pays tribute to brother killed on A23
A death or serious injury every six weeks
Streatham's message to Sadiq on road deaths
'Deadly complacency over Streatham road deaths'