Council officers have told us that statutory consultation on the Pathfield Road traffic calming scheme will start this month (February) with a view to beginning the work to implement the scheme in March.


A commitment from the council to make changes was won two years ago following the request from residents to prevent rat-running – and in particular to stop cars using Pathfield to “queue jump” eastbound traffic on Greyhound Lane.

We have been told that the council will be starting statutory consultation on a scheme this month (February) to:

·        Install a new no-entry in Pathfield Road for eastbound motor vehicles east of its junction with Rotherhill Avenue.
·        Provide tactile paving for the informal crossing of Rotherhill Avenue at its junction with Pathfield Road
·        Install new “at any time” waiting restrictions (double yellow lines) at the junction to ensure that all vehicles can make permitted movements safely. 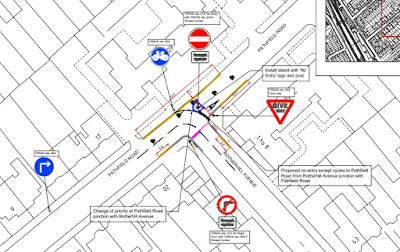 This is a significant change to the scheme that was previously proposed.

However following the scheme’s technical and safety audits council officers revised the layout as follows;

·        The proposal to prohibit eastbound traffic from entering Pathfield Road from Estreham Road was flagged as disproportionate and it was suggested would result in drivers of northbound large vehicles having to reverse into Greyhound Lane should they reach the no-entry in Estreham Road.

·        The proposed road humps have been removed based on speed surveys undertaken on 2017. They recorded drivers mean speed on Pathfield Road as being 19mph, with 85% of drivers not exceeding 24mph. Under the criteria used to assess the council’s priority for interventions aimed at ensuring drivers adhere to the boroughwide 20mph speed limit, officers say this does not justify any additional speed-reduction measures.

Following statutory consultation this month, officers say they are aiming to construct the scheme in March.