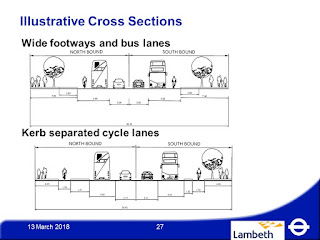 TfL shared their latest thinking on plans to change the road layout of the A23 in Streatham Hill at a meeting with local residents last week.

A formal consultation on plans will take place in Autumn/Winter 2018/19;  so this was an attempt to take some inital soundings from the community on two different approaches they are considering.


Both options would involve removal of the central reservation and straight-accross pedestrian crossings.


The senior people from TfL started by explaining what they are trying to achieve with road-planning in London currently. This includes:
They also shared some of the data they have gathered on Streatham Hill:


TfL has earmarked funding to redesign the A23 Streatham Hill between Telford Avenue and Streatham Hill station, with construction pencilled in for late 2019-20.

The full presentation from TfL is viewable as a pdf on the Safer A23 Campaign Facebook page.
Posted by Chris Holt at 10:48