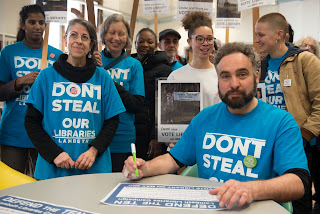 Clean Campaign update:  At the beginning of the council election campaign Streatham Green Party made a "clean campaign pledge”. We encouraged other parties to do the same.
However, residents have told us that they are upset about untruths being put out by another party on the record of Green Party councillor Scott Ainslie and have asked us to set the record straight. Here is what you need to know, with links to
third party sources so you can check the facts for yourself.

1. Green Party councillor has not voted for Conservative-proposed cuts:
This year the Green Party voted against both the Labour and Conservative budget proposals for Lambeth Council; neither addressed the financial mismanagement, and both proposed damning cuts. Instead we put forward an alternative budget which would have protected these things while ending inefficiency and waste. We will continue to do this. You can see our budget here  and see the voting here.

Far from opposing building council housing, Lambeth Green Party has positive proposals for increasing the numbers of council and genuinely affordable housing. We do oppose the demolition of people's council homes without their consent, which is Lambeth Labour's only proposal for housing regeneration. You can see more on this here.

2. Green Party councillor's role in scrutinising council decisions:
Since being elected in 2014 Green Party councillor Scott Ainslie has used councillor's rights to 'call in' Cabinet decisions for extra scrutiny by the committee on issues such as closing libraries and demolishing council estates against residents' wishes. His attempts to call in some were refused by the committee.  The scrutiny committee is chaired and dominated by Labour and in a one-party state like Lambeth acts as a rubber-stamp on Cabinet decisions.

While it is true Scott turned down a place on the committee, this is because he felt - as the only Green Party councillor in Streatham - his time was best spent on working for the people in his local area.

Last year Scott has asked council officers more questions on behalf of residents (Members Enquiries) than the both the other Labour councillors for his ward put together (46 - compared with 12 and 19). See Freedom of Information request.


In the last year Scott has attended all 6 full council meetings  – compared with only 4 and 5 attended by the two Labour councillors. In that time he has

He has spoken on behalf of Streatham residents - and has a 100% record of success -  on licensing and planning issues.