Housing in Lambeth - The Facts


View this as a pdf 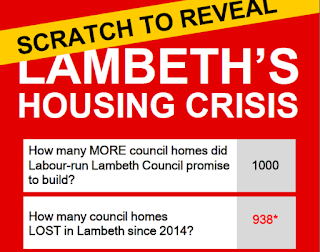 The lack of genuinely affordable housing is one of the top issues facing London. Lambeth Council's approach - to fund new housing by demolishing council estates and rebuilding with densely-packed flats and houses, much of it to be sold to investors in the private sector - is not the only option.

Read the Green Vision for Housing in Lambeth.

The Labour-led council's pursuit of this approach - without the consent of the existing residents of council estates - is wildly out of step with many people in Lambeth.

In the run-up to the local election campaign on May 3rd, many claims will be made by all political parties. Here Lambeth Green Party lays out some of the key facts - and their sources - so voters can check them out for themselves.
How many MORE council homes did Labour promise to build 2014-19?

1000 1
How many has Labour-run Lambeth built so far?
199 2  17 built by Lambeth Council and 182 by other social housing providers such as Metropolitan, Peabody. Under construction are a further 350 council-rent homes, of which 74 are being built by Lambeth Council itself.
How many council homes have been LOST in Lambeth since 2014?
938 3  According to the latest figures from the Ministry of Housing, Communities and Local Government Lambeth’s net housing stock fell by 938 homes between 1 April 2014 and 1 April 2017.

Isn’t this just through Right to Buy, which is out of the council’s control?
Some, but not all, of the fall in Lambeth’s housing stock is due to Right To Buy. The People’s Audit looked into Lambeth’s accounts for 2015/16 and found that the council’s housing stock fell during that year by 410 units. But statistics released by the Department of Communities and Local Government (DCLG) showed that only 171 properties were sold through Right to Buy in that period. 4
How much does Lambeth Council spend on temporary accommodation each year?
£26m 5
How many council homes in Lambeth are empty?
291 6  This equates to a loss of £2.9M per year in rent, the second highest loss of council rent in London in 2015-16.

How many private residential properties in Lambeth have been empty for more than two years?
478 7
How much money has Lambeth made from selling off ‘short-life’ properties let to housing co-operatives?
£89.6m 8
Semi-derelict houses were compulsory purchased by the council for a few thousand pounds in the 1970s and 1980s. Originally intended for demolition, the council initially encouraged people to get together to form ‘housing co-operatives’ and let the properties to them. Residents set about making the properties habitable and formed long-term communities at affordable rents. Since 2011, the council has been evicting tenants and selling the properties – often to developers who have then sold them on at significant profits.

Green Party councillor Scott Ainslie has discovered that since 2010, Labour-run Lambeth has received nearly £89.6m from selling 170 of these ‘short-life’ properties. Nearly £30m has been made from selling these properties since 2014.

How much of the money raised from selling short-life properties has been spent on new housing?
None  Instead it has gone into a general capital fund that has been spent on everything from council vehicles to potholes and pavements. 8

Won’t Labour’s estate regeneration plans create thousands more new council homes?
The estate demolition and rebuild plans that Labour has for six council estates will certainly result in more homes – but not many more at council rent. Instead, many of the new homes will be for the private buy-to-let market, which are way beyond the means of anyone on average Lambeth incomes.9 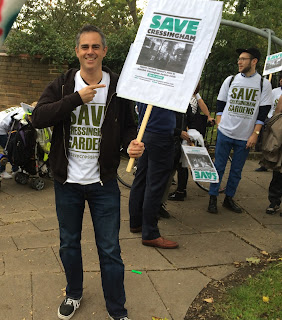 Take, for example, the proposals for Cressingham Gardens in Tulse Hill. Plans are to build 464 homes on a site where there is already a community of 306. Of the extra 161 homes, only 27 will be for council rents.10 Lambeth predict that some of these will be 25% higher than current rents because they will be set according to a formula based on the value of the properties – which will increase. And secure tenancies will be lost – along with the right to buy.  A further 75 will be classified as ‘affordable’ – but this is currently defined as anything up to 80 per cent of a market rent, which is far out of the reach of anyone on an average income in Lambeth.

And these figures, on which the council’s decision to go ahead with demolition were based, are themselves wishful thinking. Experience of estates further down the regeneration road has shown that the number of ‘council-rent’ and so-called ‘affordable’ homes falls once the proposals reach the planning committee.

For example, when the council approved plans to rebuild Westbury estate in Clapham, it promised 150 extra homes at council rent. By the time a planning application was submitted that figure had fallen to just three. 11 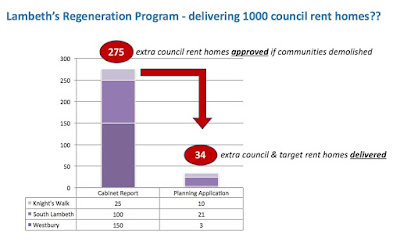 The situation for lease-holders, some of whom bought their council homes under right-to-buy is even more insecure. The value of the new homes to be built on their estates will be so much higher than their current homes, they will be unable to afford mortgages on the new properties. Labour-run Lambeth is proposing instead to offer them a shared ownership arrangement, but with very restrictive leases – and all maintenance charges falling on the residents. Lambeth’s own equality impact assessment report acknowledges that some may have great difficulty in being able to afford to return to the estate. 12

Overall, Labour-run Lambeth’s estate regeneration programme does much more for investors looking for somewhere to make a high rate of return on their capital and for the development consultants being paid many millions to oversee these schemes, than it does for the people currently living in council estates - or the 26.000 people waiting for a council home.


4. The People’s Audit: http://www.thepeoplesaudit.info/report.pdf and Lambeth Statement of Accounts 2015/2016 Page 66 and https://www.gov.uk/government/statistical-data-sets/local-authority-housing-statistics-data-returns-for-2015-to-2016


7. Freedom of Information Resonse May 2017: https://www.whatdotheyknow.com/request/406050/response/983325/attach/html/2/Response%20some%20not%20held.pdf.html
8. Response to councillor’s enquiry, January 2018
9. Private renters in Lambeth currently spend an average 56% of their income on rent – much more than the 30-40% Lambeth considers truly affordable. https://www.lambeth.gov.uk/sites/default/files/Lambeth_SHMA.pdf