Streatham Green Party team has won agreement from Lambeth Council to take steps to prevent heavy goods vehicles from entering residential roads to thte West of Streatham High Road.
Residents raised concerns last year about large articulated lorries using smaller streets as a cut through. This has resulted in lorries getting stuck and residential streets becoming congested and unsafe.
Cllr Scott Ainslie’s initial requests to council officers for action were turned down. But we have been working hard in supporting residents’ calls and highlighting the impact on the local community. The council has now agreed to new measures to prevent heavy goods vehicles using side streets. Specifically it will:

Scott says: "We believe the council has been far too slow to act on something which should be common sense.  The council has promised to monitor the impact of these measures for six months. Please keep us informed if problems persist – and we will continue to work hard to stay on the case!" 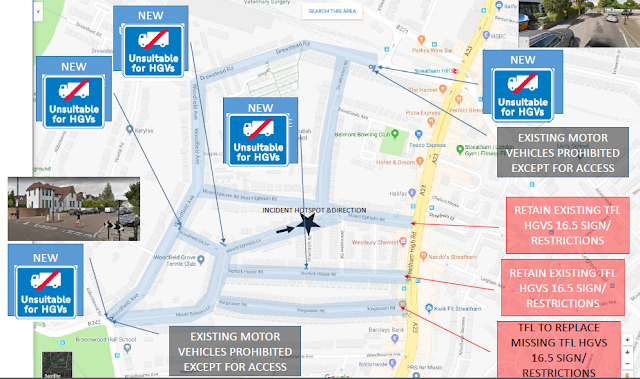 Update: 24/4/2015  Thanks to all the residents who have been in touch about this.  A number have raised concerns that the recent decision to restrict HGVs from entering neighbouring roads could cause traffic to be re-directed to Becmead Avenue.
Streatham Green Party is working to get HGVs restricted from all side roads – to protect them as quiet, safe, residential areas - including Becmead Avenue.
Lambeth officer Mr Ward has now given assurances that any potential displacement of HGVs to other side roads like Becmead Avenue would also need to be addressed and safeguarded against. He wrote to all three ward councillors:
“I have discussed the wider area situation with the Transport Strategy Manager and the Traffic Manager and we have agreed that for the time being we will investigate the matter further in terms of numbers of HGVs in the wider area. I will be organising traffic counts during the next couple of weeks that will determine how significant the situation is and if there is a risk of displacing HGVs to other side roads which is not a desirable outcome. Therefore, the current signing proposal will be kept as an option until these counts can inform us further.”


As soon as details of traffic flow data are available, which we hope with be shortly after the council elections on May 3rd, we will ensure there is a meeting for residents, officers and councillors to meet to ensure HGVs are kept off all side streets in the area.
Posted by Chris Holt at 13:38