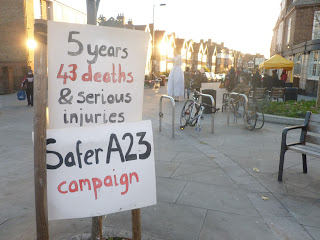 We have received more information about the work that is about to begin to make St Leonard’s Junction safe.

The improvements at the junction of Streatham High Road, Mitcham Lane, Tooting Bec Gardens and Gleneldon Road come after years of local campaigning to get safety concerns addressed.  It is a major ‘win’ for Streatham.  However there will be disruption while the work takes place and so your Green Party team will be working hard to ensure that this is minimised.

Transport for London (TfL) has agreed:

The planned work is as follows:

Removal of the existing island in the centre of the junction and construction of a new one.  A raised table will also be constructed at the junction of Streatham High Road and Gleneldon Road.   During this work Mitcham Lane will be closed to traffic going southbound on the High Road with a diversion route being put in place via Gleneagle Road and Ambleside Avenue.   Gleneldon Road will be closed to traffic from the High Road.  The 215 bus will be sent on a diversion route.

A new island will be created where Tooting Bec Gardens enters St Leonard’s Junction.  New cabling will be put in underground for the new traffic lights. There will be a no right turn for traffic wishing to turn into Mitcham Lane from Tooting Bec Gardens during this period.

The nearside lane on both sides of the High Road will be cordoned off for works to be undertaken at the centre of the Junction.   Some bus routes will be redirected.

Dropped kerbs will be put in with new tactile paving for pedestrians.

An island at the new pedestrian crossing will be installed adjacent to the Christian Manna Centre. During this time the lanes on both sides of the High Road will be reduced from two to one between the Streatham ‘Dip’ (the junction with Stanthorpe Road and Gleneagle Road) and the St Leonard’s Junction.

The pedestrian crossing by Andrews Estate Agents at the north of the junction will be removed.

Resurfacing of the road, a new bus lane on Tooting Bec Gardens and repositioning the disabled parking bay (this will mostly happen at night).

New signalling will be installed and works completed.

As you will know these improvements follow the emergency sewage repair works on Streatham High Road.  During this period we worked very hard to highlight the concerns of local residents to TfL. As a result a number of changes made to minimise the disruption.   We will be doing the same during the new works at the St Leonard’s junction.  So please do get in touch with us with any concerns during the improvements.

With all good wishes for a better Streatham!