Lambeth streets cleaned only once every two months - and the council doesn't know how many bins it has! 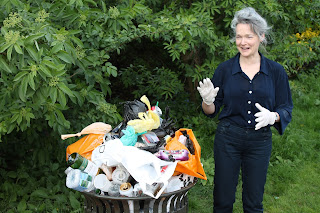 Information obtained by the Green Party has revealed that Lambeth Council only sweeps our side streets once every two months - and it doesn't know how many litter and dog waste bins it has, or how often they are being emptied.

Green Party co-leader Jonathan Bartley - a candidate for St Leonard's ward in this May's local council elections - said: "Lambeth needs to get a grip on waste. These responses to questions from the Green Party cement once again the council's reputation as London's dirtiest borough."

Street cleaning
An Ockley Road resident asked Green Party councillor Scott Ainslie to find out how often her street was be swept, writing: "It seems that the only time our street is cleaned is when I ring the call centre. We get a lot of litter from both the High Road and from people leaving the Virgin Health Club (empty bottles, coffee cups etc) so I am at a loss to understand who has decided, and why, our street should be cleaned so infrequently.

"I would be grateful if you would look into this for me and let me know what the policy on street cleaning is and who makes it. My understanding is that Lambeth contracts out waste and cleansing services so I wonder whether the contractor is fulfilling the terms of his contract."

Cllr Ainslie received this reply from the council's contractors Veolia: "In general terms minor roads receive a full sweep every eight weeks and litter picking twice a week. Major roads such as Streatham High Road are swept daily. Most roads are inspected once per week by the area environmental manager from Veolia. Roads which have received significant volumes of complaints are generally inspected two times a week and main roads are inspected daily."

Litter bins
In response to a separate Freedom of Information request, Lambeth conceded that it does not record the total number of litter bins in the borough; it estimates around 1200. And while its contract for bin emptying specifies daily in zone 1 and twice a week in zone 2, Lambeth doesn't keep any record of whether this is actually happening.

The response says: "Specific monitoring information on emptying of bins against target is not held.

"Litter bins are typically observed during a street cleansing inspection, whereby the standard of litter picking or street sweeping is also checked. These inspections take place on the day or day following the scheduled day of sweep or litter pick. They do not take place in a sequential order or at a specified time. The inspections can take place anytime to assess the quality of any service undertaken by the contractor. The number of inspections and frequency will vary each week."

Jonathan Bartley said: "It beggars belief  the council doesn't even know how many bins it's got or whether contractors are fulfilling their obligations to empty them. It's more important than ever - depsite any plans Lambeth mught have to cut household bin collections - a weekly service is maintained, that there are regular patrols to deal with flytipping and Lambeth knows whether or not private contractors are doing the job they are paid to do to keep our streets clean."
Posted by Chris Holt at 13:10