Recycling rates down - incineration up as Lambeth pollutes London's air 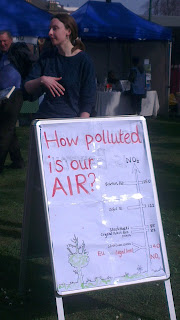 Lambeth Council have responded to a members enquiry sent by Streatham councillor Scott Ainslie revealing that they recycled an even lower proportion of waste in 2016-17 than in the previous two years. This is despite Lambeth Labour boasting of "improved recycling" in their "greener, cleaner borough" motion at their council meeting on 24th January.

The news comes in the week Brixton Road breached annual air pollution limits in one month.


Lambeth's recycling efforts have had a troubled history, with Lambeth Green Party flagging issues with the service for many years.

The Department for environment, farm and rural affairs (Defra) data paints an even less flattering picture than Lambeth's official stats above, showing that at no point since 2011/12 have Lambeth raised their recycling level above 30%.

"The Green Party will continue to hold Lambeth to account, and ensure that the public are provided with accurate information. The bald fact is that these recycling rates are below par; in 2015/16, WasteDataFlow reported that the overall average rate for the UK was 43%. In addition to this, the incineration of waste only adds to Lambeth and London's desperate pollution problem, which is blighting the health of many residents.