New community garden gets the go-ahead

Land next to the railway between Gleneldon Road and Wellfield Rd that has lain derelict for more than a decade is to be turned into a community garden, thanks to the determination of local residents.

A group of local people have got the go-ahead to lease the land from Network Rail and will form a trust to manage the land for the community.

They plan to transform what is currently a windswept eyesore that attracts fly-tipping into a beautiful oasis, growing organic fruit and vegatables, and encouraging participation from local schools, youth groups and the wider community.

Initially Network Rail had earmarked the land for commercial development, but negotations over the last two years have paid off.

"I'm so thrilled that the hard work and 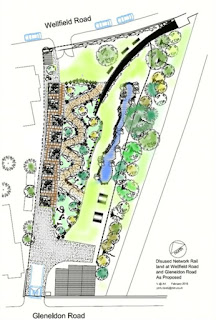 persistence of local residents has succeeded," said Green Party councillor Scott Ainslie, who supported the community in their talks with Network Rail. "So much patience and effort has gone in. What a great example of what can be achieved with positivity and working together."

In researching the history of the site, they have found that the land, which most recently was used as a builders yard, had an earlier history as garden nursery. Maps from the late 19th and early 20th centuries show greenhouses there.

Cllr Ainlsie said: "It's a wonderful project for this little patch of land to return to producing locally grown food - and making Streatham an even more beautiful and friendly place to live."