Campaigners meet police over threat to Streatham police base

Along with local Green councillor Scott Ainslie and London Assembly member Sian Berry I met with police yesterday at Streatham Police base to discuss its proposed closure by the Mayor.


Greens are opposed to the police base closure and removal of Streatham's police to Brixton.


The Mayor of London is proposing to close police stations across London as a result of Government budget cuts. We think that closing Streatham police base is entirely counter productive and an inefficient use of resources.


Although the proposal to close the Streatham base is being made by a Labour Mayor we want a community campaign that has as much cross-party support as possible so we also invited a Lambeth Labour councillor into the meeting.


At the meeting police told us about ongoing pressure for years on police numbers and about the new "squatting" model of policing that the Mayor wants to roll out by putting police in rooms in other buildings.

Alarmingly it seems the mayor has not ruled out for example entering into partnerships with supermarket chains, whereby police would be given rooms in stores for free in exchange for a boost to the image of the store. To have London's police become reliant on unaccountable private sector interests in such a way is alarming to say the least.


The meeting with Chief Insp Dan Rutland and Insp Teresa Hubard-Chason revealed how many questions still remain unanswered about the Mayor of London's plans to close Streatham police base. It was also a shock to hear that police officers themselves aren't being consulted.

What did become clear however is that the police base has much more use than the Mayor implies in his report on police station closures - being a space for crucial team briefings and a visible first port of call  for many different reasons, not just the reporting of crime.

Streatham's new base was only established a couple of years ago at a cost of half a million pounds. It would be a scandalous waste to now scrap it. And money saved would clearly be minimal as the police base is in a very cheap lease.  But it would be the mentally ill, and older and disabled residents who would clearly be hit 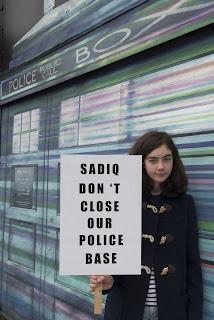 the hardest. It simply isn't acceptable to sacrifice the wellbeing and security of Streatham's community at the altar of mythical 'efficiency savings'.


Please sign the petition here to stop the closure of Streatham police base. You can respond to the Mayor's consultation here.