With two weeks to save our police base, campaign reaches ITV News 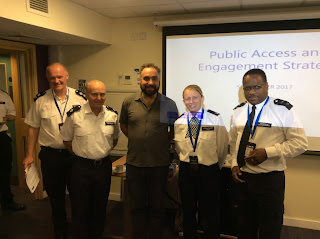 With only two weeks until the end of Mayor Sadiq Khan's consultation on plans to close Streatham's police base, Green councillor Scott Ainslie met Lambeth's borough commander Richard Wood and other senior police chiefs this week.

Metropolitan Police Force budgets face cuts of around £1billion since 2010 - and savings are being sought across the capital.

But the mayor's proposals to make cuts by closing almost all the police bases in Lambeth - leaving just Brixton open - are facing strong opposition, especially in Streatham, where the new police base opened less than three years ago at a cost of £500,000.


Councillors and residents met on Thursday to co-ordinate campaigns agains the threatened closure.

"We encourage everyone in Streatham to complete the mayor's consultation, which ends on 2 October," said Cllr Ainslie. "There are only two weeks left to save our police base."

Have your say online here.

Email ThisBlogThis!Share to TwitterShare to FacebookShare to Pinterest
Labels: police