Parking tickets 'out of the blue' on Babington Road 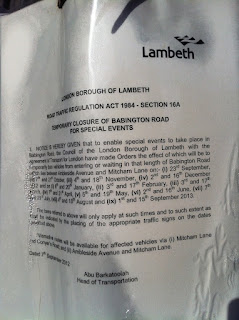 We were contacted today by local residents on Babington Road who said they had suddenly received parking tickets yesterday morning (Sunday) imposing £110 fines.

It seems that Lambeth Council have decided to impose a parking restriction on the day of the Babington Road market in the section between Mitcham Lane and Ambleside Avenue, without adequately informing residents.

Closer inspection did reveal a small notice on one lamp post. The notice has apparently been there since September, but could be easily missed. (Even Richard who runs the Manor Arms hadn't seen it). Apparently it had not been enforced until yesterday.

This is completely unacceptable. Having chatted to local people, and now heard from Angelina The Town Centre Manager, it also seems that the parking restriction is completely unnecessary as traders have plenty of room to park.

The timing also couldn't be worse for the plans to develop the market area, which needs the support of local residents.

We are pushing for the parking tickets to be cancelled and/or refunded. We are also asking for the parking restriction to be permanently lifted and for assurances that residents won't need to move their cars twice a month for the market to take place. We will post an update as soon as we get one.

[Update 5/2/13: We have just been told by Lambeth Council that the penalty charge notices that were issued on Sunday have been cancelled]

Posted by Jonathan Bartley at 15:40