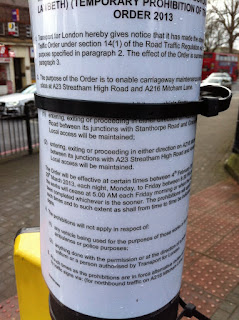 We wrote last week that we had some good news, and TfL had agreed to resurface the junction of Mitcham Lane, Streatham High Road and Tooting Bec Gardens. This was long overdue, and many local residents had said that the surface was so bad, their houses were shaking when the buses went over the potholes.

However, the resurfacing wasn't going to extend down towards the dip, most notably to cover the area at the bus stops which are in a terrible state.

We therefore contacted TfL to ask if they could extend the works to cover the bus stops, and we are pleased to say that they have agreed.

This was the original map produced by TfL (Via Green Party London Assembly Member Darren Johnson's office) which shows the area which was originally to be resurfaced:

The area will now extend further down Streatham High Road (to the bottom left on the map).

We are still waiting to hear the results of the safety review at this junction as well as plans to sort out the congestion.

Posted by Jonathan Bartley at 08:03