The Green Team working with all for a safer A23


Last night's Streatham Transport Question Time saw politicians and influencers of all political persuasions get behind the campaign for a safer A23 through Streatham.

The campaign is calling on Transport for London (TfL), which is responsible for Streatham High Road and Streatham Hill, to balance more equally the needs of moving traffic with the safety of people living in Streatham.

It's taken several years of campaigning, highlighting the tragic death and injury rate on the A23, but within the last few months, TfL have held a series of meetings where they have listened to the experiences of people in Streatham.

Green Team member Chris Holt, who helps to run the campaign, told last night's public meeting: "Imagine what Streatham would look and feel like if its transport decisions actually put into effect Lambeth Council's stated priority that the needs of pedestrians and cyclists should come first.

"How many of us would get out of our cars and start to walk and cycle? How many would let our children walk and cycle to school?"

At a meeting with TfL last week, local councillors including the Green Party's Scott Ainslie and members of the Safer A23 Campaign heard that new plans for improvements to St Leonard's junction will be displayed in Streatham libarary in December. 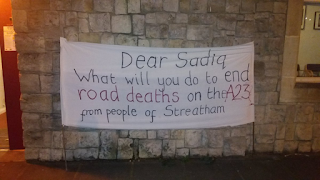 They were also asked to give views on possible improvements to Streatham Hill and Telford Avenue - and several other collision blackspots.

The campaign has already won some minor safety improvements, such as shorter waiting times for pedestrians at some crossings and a re-phasing of traffic signals at the junction of Streatham High Road and Leigham Court Road. 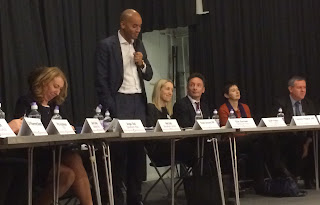 There was also strong disappointment that both Boris Johnson and Sadiq Khan have ruled out routing Crossrail 2 through Streatham.

"We haven't had a major piece of transport infrastructure to Streatham since 1926," said Cllr Ainslie. "And that's part of the reason why our high road is ram packed full of cars and lorries.

"It's only now with the power of the community coming together across party political divides that TfL is beginning to listen. We have to keep on shouting."