Streatham streets to be made 'Greener' 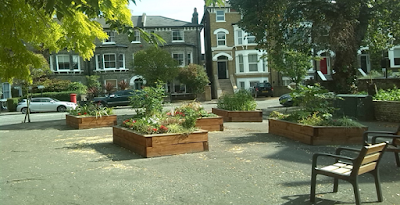 After four years of campaigning by the Green Team in Streatham, improvements will be made over the next few months to streets in four Lambeth wards, including three in Streatham.

Using nearly £300,000 from the Streatham Hub Tesco's development, money will be spent on traffic calming, street de-cluttering, more public seating, and "greening" of the environment with the planting of trees and raised beds.

Green councillor Scott Ainslie has been working with council officers to make the most of the money allocated to his ward, St Leonard's. There the improvements include two "showpiece" schemes:

The Green Team in Streatham is disappointed that not more is being done to improve conditions for cyclists, such as making Prentis Road two-way for cyclists. They will be holding out for the improvement works to include making Shrubbery Road one-way.

The Greens also question why money from a Streatham development is only being spent on three of the four Streatham wards. Streatham Hill is missing out while Thornton ward, which covers parts of Balham and Clapham Park, has been included.