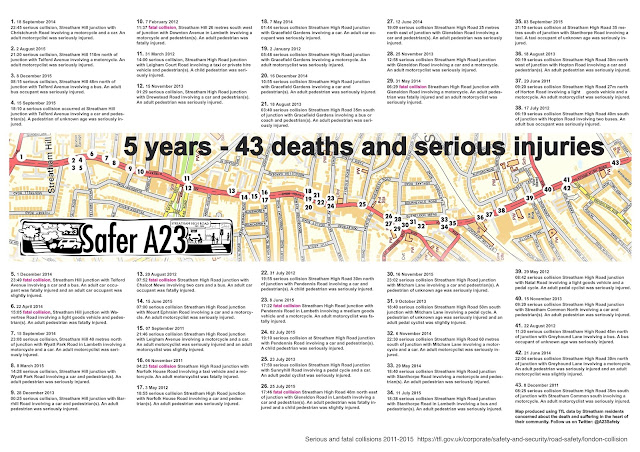 Streatham's newly elected co-leader of the Green Party Jonathan Bartley has hit out at the ‘deadly complacency’ of Transport for London after the new  statistics showed a shocking level of deaths and serious injuries on the A23 through Streatham.


Jonathan, a long-time campaigner for safer roads, said “Enough is enough. For years people in Streatham have been sounding  the alarm on the tragedies they witness almost every week on Streatham High Road and Streatham Hill. This cannot go on any longer without Transport for London taking the problem seriously.”

Figures released this week and obtained by local residents using a Freedom of Information request reveal police were called to 389 collisions on the A23 through Streatham in the five years from 2011-15. Of these eight resulted in deaths and 35 in serious, life-changing injuries.

TfL data reveals that on the 1.8-mile stretch of road between the south circular and Streatham Common, pedestrians are the most at risk.

Of those who died or were seriously injured 24 were pedestrians, including 3 children; 15 were motorcyclists; 5 were bus passengers, 5 were travelling in cars and 3 were  cyclists.

The number of collisions resulting in serious injuries showed no reduction, staying at similar levels to the five years 2010-14. The number of deaths rose by a third, from 6 to 8.

Residents working together as the Safer A23 in Streatham campaign will meet this Friday (21st October) with senior TfL managers, local councillors and Streatham MP Chukka Umunna.

Jonathan, who led successful 4-year campaign to win improvements to the treacherous junction of Mitcham Lane and Ambleside Avenue in Streatham, urged TfL to listen seriously to the concerns of local people.

“Transport for London seems to be complacent about the danger that local people face. People in Streatham shouldn’t have to take their lives in their hands to get to the shops, or school or a bus stop. TfL must seriously reconsider its priorities and show that any talk of reducing road danger is not just empty words – but matched by real decisions that result in action to make Streatham safer.”