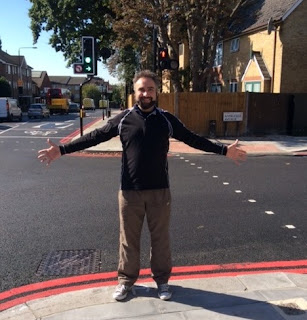 Green Party councillor, Scott Ainslie,  couldn't resist having his photo taken at the newly modernised junction of Mitcham Lane and Ambleside Avenue - once notorious for collisions and fatalities.
Now, after four years of concerted efforts by Scott supporting the community's calls for TfL to take action, work has been completed and and the much-improved junction is already saving lives.
The junction now boasts: better lighting, advanced stop lines for cyclists, a filter light for right turns, a countdown crossing, a new 1.5m cycle lane, renewed footways with wider crossings for pedestrians and cycle safety mirrors on traffic signals

These changes have reduced the danger for cyclists, pedestrians and vulnerable road users, including people with buggies and wheelchairs.
Cllr Ainslie thanked all those who contributed to the campaign, which included demonstrations by children at nearby St Leonard’s Primary school and a petition to the London Mayor.
“Thanks to all those who helped make TfL listen,” said Scott.  “There’s more to do to make Streatham safer and this shows just how determined Greens are to get things done!”
Read the how we won this campaign here.