Another fatality on Streatham High Road 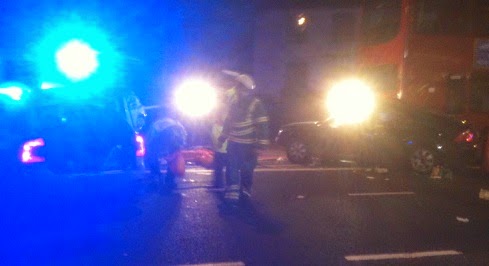 There was another fatality on Streatham High Road last night, near the bus garage at Streatham Hill.   This picture was taken by a local Green Party member who lives nearby.

Once again, it is too early to say what happened, and we will have to wait for the police report, but eye witnesses suggested that a car spun and hit a bus.

To put this in context, the average number of fatalities on the roads in a year per inner London borough due to traffic collisions is four.  We have had three in a six month period, in just one section of Lambeth (Streatham).

The situation in Lambeth as a borough has been getting progressively worse.  The latest figures show that Lambeth had the highest number of fatalities (7) of any London borough, and the second highest number of serious injuries.  You can see the figures here.

With regard to the High Road, we have previously looked at the very high number of collisions and deaths, and the main factor in it which appears to be the speed of traffic.

One way of tackling the issue is a 20mph limit down the High Road (which would also help tackle air quality).  But the block at the moment on this happening is Lambeth Council. Even though Transport for London have responsibility for Streatham High Road, they say they won't act until Lambeth introduces its 20mph borough-wide limit on other roads in the area.

Lambeth Council have been dragging its heels on a 20mph borough wide-limit for years.  After a lot of campaigning, they finally committed to doing it almost two years ago.  But they still refuse to set a timetable.  And while they continue to dither, more people will be seriously injured and some will die.