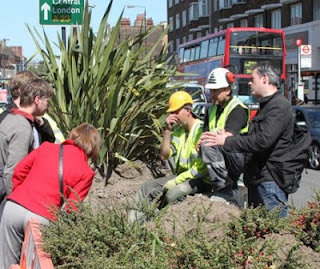 The local community forum, Streatham Action, has organised a public meeting on Tuesday 21st May to discuss the upcoming changes to Streatham High Road.

This summer sees a great opportunity to improve the High Road, make it greener, less dominated by traffic, noise and air pollution, and a generally more pleasant place to live, work and shop.

The major change is that the planters are set to be removed between Woodbourne Avenue and Streatham Hill Station. This was decided in the Streatham Masterplan in 2009. Since then (for the last four years) Transport for London have left them completely untended because they did not want to invest any money given that the planters were due to be taken out.

In their place, the good news is that trees will be put in (there was some concern that this would not happen). The recent drilling of holes on the High Road was to explore whether there was enough space to plant them avoiding utilities. Having chatted to the engineers there, the news appears to be good. Tfl have confirmed, through London Assembly member Darren Johnson's office, that they will replace lost greenery and plant at least 20 trees. We are pushing for more.

The work is being paid for by the Mayor of London's Outer London Fund and Lambeth Council are responsible for public consultation on the project. However it looks as if the consultation period will be very short (if there is any formal consultation at all). The plans are about to be announced, but we gather the following decisions have been made by Lambeth Council and Transport for London...

- There will be no dedicated cycle lanes, despite requests from cyclists. Instead TfL and Lambeth Council have decided to widen the bus lane to 4.5m and cyclists will be expected to travel in that.

- The trees that will be put in will be of a different variety to the ones put in outside the Odeon when the first phase of work was done, and a lot less expensive. It has emerged that the trees outside the Odeon cost around £6,000 each. The new trees will be around £250 each, and better suited to the central area of the High Road.

- In addition to the 4.5m bus lane, there will be one other lane of traffic along this section of road. In sections however, there will be some additional lanes to facilitate turning into side roads.

- A 20mph limit will not be introduced to ease the "stop-start" traffic on the High Road, help traffic flow, and reduce collisions and their seriousness as well as easing noise and air pollution. Lambeth Council have told us that they were won over to the idea. The block on this however has come from Transport for London.

- There will be no pavement widening in this stretch, even though many local people have requested it. Instead the central platform remaining in the middle of the road will be widened where possible.

- The road area will be resurfaced when the works are complete. There will also be some repaving along this section of the High Road.

Although there may be some progress in the right direction, there is a feeling from many people that this could be a huge missed opportunity to do more unless people make their feelings knows to Lambeth Council and TfL.

More details should be forthcoming at the public meeting this Tuesday 21st May, which takes places at 7.00pm at St Leonard's Church. All are welcome to attend.

Posted by Jonathan Bartley at 17:40