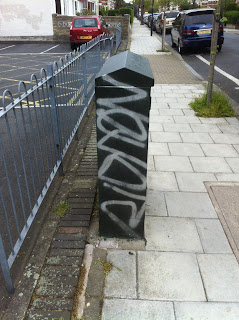 We have reported the graffiti on Pathfield Road and asked the council to remove it, most notably outside number 94 and also 25a - 29c.

We will put a note around to local people and follow up in a few days a make sure that it has been done.

[Update 7th June: We have done a follow up inspection and the graffiti has been removed]
Posted by Jonathan Bartley at 12:28