Who turned out the lights on Streatham Green?

The clocks have gone back an hour, and the evenings are getting darker - which makes the absence of any light after dusk on Streatham Green all the more concerning. The picture above was taken on Friday around 8.00pm, so this was happening before the clocks changed.

There are a lot of lights on the Green as this daylight picture below shows. But for some reason that aren't coming on after dark anymore. 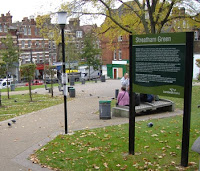 A few locals noticed that one or two bulbs had gone on the lights, but nothing on this scale, so it remains a mystery whether this is an electrical fault, or deliberate (perhaps to save some money?). Either way, several people have been in contact with us expressing their concerns about the safety implications.

We have contacted both Lambeth Streetcare and Lambeth parks and we are waiting for a response. If anyone can, er, shed any light on the situation, we'd love to know!

[Update 31st Oct: An enquiry has been raised with the lights engineer in Lambeth and also a service request in case the lights are at fault. Because the roads around the Green are maintained by Transport for London, Lambeth are unclear whether it may be TFL's responsibility, not theirs. I have therefore also raised the matter with TfL]

[Update 14th Nov: As reported by @CarolineAlng here the lights on Streatham Green were back on last night ]

[Update 28th Nov: According to Lambeth the sensors on the top of the lights had been stolen and this was the reason why they were not coming on. ]

Posted by Jonathan Bartley at 21:34