Progress on rubbish and fly-tipping outside Keen's Close, Mitcham Lane 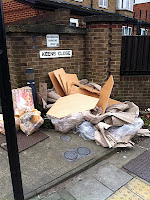 We have been working away for six months or so to get the rubbish and fly-tipping cleared outside Keen's Close on Mitcham Lane (opposite St Leonard's Primary School) and prevent its continued accumulation.

We talked to local residents in the Close, and it turns out this has been a problem for years.

Lambeth have said that they won't clear it as it is not their responsibility.

Our investigations revealed that

L&Q Group actually have responsibility for the land, as they manage the Close. We therefore contacted them and discussed various options. In the meantime they have come down to clear the area several times, although the rubbish has quickly built up again afterwards.

They have now been in touch to say they have a budget to landscape the area and plant shrubs. This hopefully will prevent fly-tipping in the future and further rubbish and waste accumulating there. We'll post an update when it is done, and see whether it does the trick.