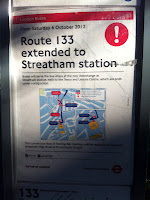 There's a bit or relief for residents on Tooting Bec Gardens, with the announcement that the 133 route is being extended as far as Streatham Station, ending and beginning at the new hub development bus stand.

This means the 133 will no longer begin and end its route at St Leonard's church/ Tooting Bec Gardens, but travel instead further south on Streatham High Road up to Streatham Common.

Many residents on Tooting Bec Gardens have been trying to get the bus stand outside St Leonard's church moved from the road, and the news will be interpreted as a step in the right direction.

The road, which is a red route, is frequently clogged up with traffic at peak times, which parked buses contribute to, with regular incidents of road rage. Local residents have also raised concerns about the increased noise and narrow pavement by the bus stand, which seems too small to cope with both waiting passengers and pedestrians.
Posted by Jonathan Bartley at 15:04