Labour councillors in Lambeth have watered down proposals made by the Green group to clean up Lambeth’s toxic air. 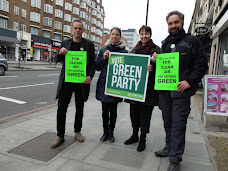 he move came at the full Council meeting on September 22nd, where Green councillors proposed a motion, ‘Clean Air in Lambeth’, which called on Lambeth council to act urgently to improve air quality and address the climate crisis across the borough. This included setting its own targets and adopting Clean Air in London’s (1) proposal to set an ‘Air Pollution Control Area’ (APCA) within the existing Air Quality Management Area across the borough based on the World Health Organisations most recent guidelines (2).

This would also have given the council the ability to review the APCA every year to decide whether to maintain or lower the emission limit or to require zero emissions which could be linked to the dynamic borough wide Carbon Action Plan.

But Labour councillors amended the Green group’s motion removing the proposals which would have allowed the council to set its own targets to address air pollution and greenhouse gas emissions.

The Greens are now urging the Labour administration to reconsider their rejection of the proposals and adopt them.

Cllr Pete Elliott said, “The Labour group have missed a vital opportunity by removing the ability to set its own targets as bold action on air quality improvement comes with significant co-benefits. Many of the causes of poor air quality are the same things that have contributed to our climate emergency. So, by addressing the causes of poor air quality we will also help ourselves on our urgent journey to net zero carbon emissions in Lambeth by 2030.”

Cllr Nicole Griffiths said, “This motion identifies, and focuses on, vitally important issues – the good health and wellbeing of our children, and all those who either have, or are vulnerable to, pollution related illness. This is particularly relevant in this time of covid. We need to do everything we possibly can to reduce greenhouse gas emissions of all kinds as air pollution is one of the biggest environmental threats to human health, alongside climate change”.

She added, “Despite some progress, Lambeth is still one of the most polluted boroughs in Europe. Hundreds of people have had their lives cut short every year and all of us in Lambeth are impacted daily by poor air quality. We’re relieved that this was recognised at Wednesday’s meeting, but disappointed that the council has missed a crucial opportunity to set it’s own targets linked to the upcoming borough Carbon Action plan”.

Posted by Nicole Griffiths at 16:20