Transport for London is developing new plans for St Leonard's Junction - where two people have been killed and five seriously injured in just over two years.

The Streatham Green Team and other members of the Safer A23 Campaign have been working with TfL to propose changes to the road design aimed at reducing danger at the junction. For decades the junction has been a hazard for local people.

In 2015 TfL and Lambeth Council proposed a new 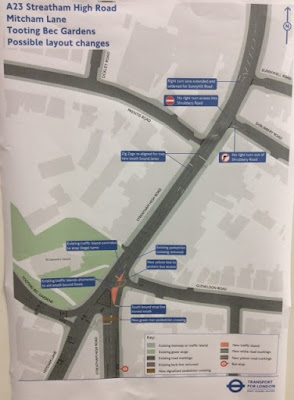 pedestrian crossing 100 yards south of the junction level with Streatham Green, but this was
widely rejected by the public when plans were shared.

The new plans - which will be put out for formal public consultation in the Spring - seem to us to be much improved.


Road planners told Streatham's Green Team they believe this will create a safer crossing on Streatham High Road at the "line of desire", where TfL's monitoring shows nearly 300 people an hour currently try to cross where there is no Green Man.

In addition they propose introducing no right turns into or out of Shrubbery Road - thus aiding the smooth flow of traffic along Streatham High Road at this point - and also along Tooting Bec Gardens - which could potentially lead to less hazardous driving at St Leonard's Junction. They think it may also reduce the number of people using Prentis Road and Shrubbery Road as "rat runs".

All of this will be tested in road modelling to be carried out in the new year. The results of this - and public consultation in the Spring - will determine if the plans go ahead.
Posted by Chris Holt at 16:47