A couple of years ago, we looked at the huge number of collisions on Streatham High Road, particularly those involving cyclists.

Sadly, no segregated cycle lanes are being put in as part of the current works on the High Road in the area up towards Streatham Hill, even though local people asked for them. Instead cyclists are being told to use new enlarged bus lanes. Nor have Transport for London agreed to a 20mph limit on the High Road, to smooth the flow of traffic, cut noise and air pollution, and generally change the stop-start nature of the road. It would of course make it much safer and change the culture of the road.

We have now received from Transport for London (via London Assembly Darren Johnson's office) the data of average speeds on the High Road. This has been put into a graph by a local Lambeth cyclists (who didn't want any credit). This is what he came up with: 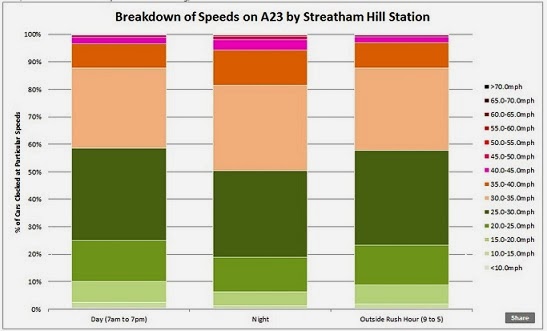 There are of course no signs to indicate what the speed limit is in this section. It is in fact 30mph.

Average speeds were measured by TfL over a week, just north of Streatham Hill, on both sides (northbound and southbound). Everything above the green area is over 30mph which shows about half of vehicles are speeding.

Posted by Jonathan Bartley at 18:47