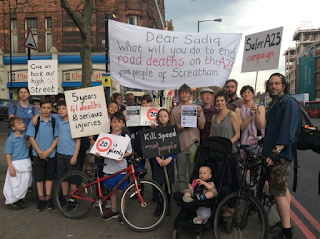 
Provisional stats for 2018 show there were 212 collisions on the A23 between its junction with the South Circular and the border with the borough of Croydon, including 19 resulting in life-changing injuries, up from 133 collisions, 13 of which were serious, the previous year.


Local residents who have been campaigning for safety improvements since 2015 have won a commitment from TfL to spend £8.6m on a redesign of the A23 at Streatham Hill, where the ‘current’ motorway feel of the road encourages drivers to speed up. Green Party Assembly Member Caroline Russell has now been told that a public consultation on plans to change the design to one more suited to a town centre, initially promised for early 2019, will now go begin in the second week of November. 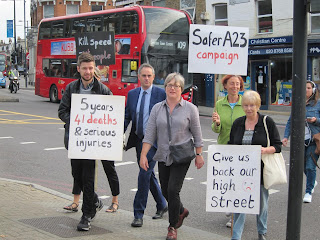 Local Green Party councillor and Safer A23 campaigner Nicole Griffiths said: "These latest statistics demonstrate what all of us living in Streatham know - that it's a killer road, dividing our community and steps to make it safer for local residents and road users are long overdue."

Source: https://tfl.gov.uk/corporate/safety-and-security/road-safety/london-collision-map
Note, from September 2016 onwards, the police have used a new method of recording injuries and figures for serious and slight injuries are not directly comparable with previous years (severity of injuries is thought to have been under-recorded in the past).