Collisions increase on A23 in Streatham 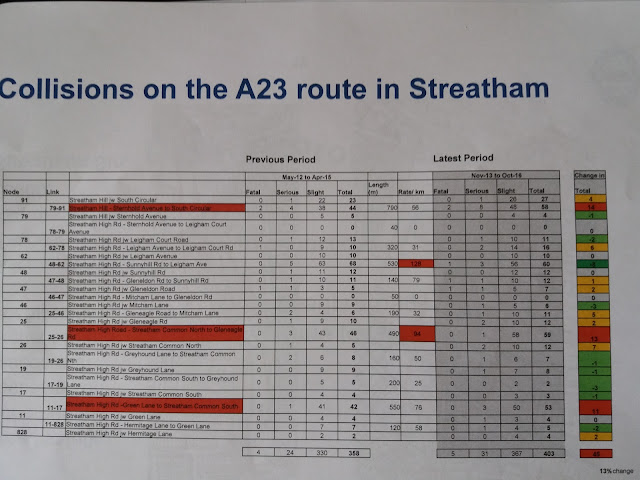 Collisions on the A23 through Streatham have increased, according to latest statistics from Transport for London.

In the period November 2013 to October 2016 there were 403 collisions, including 5 fatalities and 31 serious injuries on the A23 between the South Circular in the north and the junction of Streatham High Road and Hermitage Lane in the south. This is an increase of 13% on the previous period (May 2012 - April 2015). Fatalities rose from 4 to 5, and serious injuries rose from 24 to 31.

While the number of collisions fell in some stretches of the road, in others they increased. Danger spots include:

The statistics were shared by TfL at an open meeting  of the Safer A23 Campaign on Friday.

Green Councillor Scott Ainslie, who attended the meeting, said: "Enough is enough. This carnage has got to end.

"We have sat with TfL many times now highlighting the suffering this road causes our community. The priorities of road designers need totally re-thinking so that protecting human life becomes a genuine priority - not just words."

At the meeting senior TfL managers said a formal six-week consultation on plans to improve lethal St Leonard's Junction would begin at the end of the August, with work on the junction planned to start in early 2018.

Plans include:
* the creation of a proper pedestrian crossing over Streatham High Road, south of the junction with  Gleneldon Road
* removal of the pedestrian crossing over Streatham High ~Road, north of Gleneldon Road
* Creation of bus lane along North side of Tooting Bec Gardens
* Instituting no right turn into or out of Shrubbery Road.

This last aspect of the plans has received extensive criticism by residents of Stanthorpe Triangle, whose streets will no longer be accessible to traffic travelling from the south. TfL were asked to go away and consider proceeding with the plans but without this controverial aspect. Or to find ways of mitigating the problem, for example by allowing traffic to other roads  into the triangle, which is home to around 1,000 people.


Cllr Ainslie said: "It was disappointing to see that after highlighting the Stanthorpe triangle residents' concerns about TfL's proposals for no right turns into or out of Shrubbery Road back in February, that TfL came to the table again this time having not responded to this. Having reminded them of this issue and had it properly minuted, we will ensure their modelling considers leaving in at least one of the options."

Plans to improve the Streatham Hill end of the A23 were criticsed at the meeting by members of the Safer A23 Campaign, as "just tinkering".
Posted by Chris Holt at 13:49