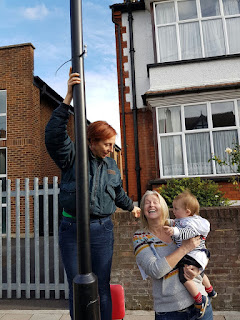 Pollution levels in Streatham broke EU legal limits in December - according to data from air quality monitors being organised by Green Party members and other local volunteers.

The levels of poisonous nitrogen dioxide gas were even worse than those recorded in November, when two of three Streatham monitors broke legal limits.

Local campaigner Chris Holt, who is helping to monitor air quality outside Streatham and Clapham High School in Daysbrook Road, Streatham Hill, said: "Even on these quiet side streets away from the busy main road, the pollution caused by diesel engines was dangerously high in both November and December."


The Daysbrook Road monitor measured NO2 levels of  43.69 in November and 47.5 in December. The EU legal limit is 40. The air quality monitor situated on Dingly Lane, off Woodfield Avenue, recorded NO2 within legal limits in November but an illegal level of 43.2 in December.

The monitor outside Fenstanton Primary School, Abbots Park,  Streatham Hill broke legal limits in November and December with even higher readings of 68.02 and 77.83 respectively.

Across Lambeth as a whole, 24 out of 27 air quality monitors broke legal limits in November and 30 or 34 in December.

Lambeth Council is currently drafting an Air Quality Action Plan to tackle the pollution, which causes nearly 10,000 deaths in London each year. Lambeth Green Party is calling for stronger measures, such as an end to waste incineration and conversion of the council's fleet of vehicles away from diesel.

It was reported this week that after sending warnings to the UK over its failure to reduce air pollution every year since 2010, the EU was now course to start legal proceedings within two months.


The Streatham Green Team are part of a band of community volunteers who are taking monthly N02 readings from their neighbourhoods during a six-month project called Love Lambeth Air run by Mapping for Change for Lambeth Council. Find out more here: http://mappingforchange.org.uk/projects/love-lambeth-air/

Results from across London can be seen on this map.
Posted by Chris Holt at 15:44