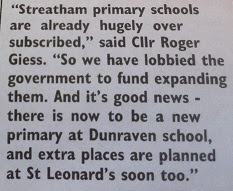 The headteacher of St Leonard's School has said that claims there are plans to expand places at the Church of England Primary are "wildly inaccurate, highly speculative and based on no substance whatsoever."

His comments, which came in a letter to parents yesterday, was a response to claims made by Lib Dem councillors who claimed credit for securing extra places at the school.

But Simon Jackson, the headteacher of St Leonards yesterday sent the following letter by email to parents entitled 'Expansion Misinformation':

"You may have received some literature delivered to your home which states that 'extra places are planned at St Leonard’s soon'.

"I would just like to make the very clear point that no such decision has been taken; no formal talks have been held between the school’s governing body, the local authority and the diocesan board of education. As such, this statement is wildly inaccurate, highly speculative and based on no substance whatsoever. I can also confirm that the person who has been quoted as making this statement has not spoken with anybody connected with the leadership of our school.

"St Leonard’s has been placed on a list of schools that could be expanded, along with many other schools for a few years now. This does not necessarily mean that expansion is definite. I can assure you that consideration would only be given to such a project if it was in the interest of our school, its pupils and their families, and we are nowhere near being in possession of any facts which could help us establish a position at this time.

"Naturally, if I did have definite information concerning the future of our school, I would share this with you at the appropriate time. As such, I am deeply disappointed that such a statement has been released, and have made this point very clearly to the appropriate persons within Lambeth Council. Therefore, unless you receive information directly from the school, either through the Governing Body or through me personally, please treat all “information” with the scepticism it deserves."

Posted by Jonathan Bartley at 09:27