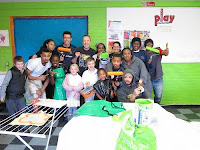 As part of its budget cuts, Lambeth council is handing over control of its adventure playgrounds, and other youth and play sites, to organisations who are being invited to bid to run them. This includes Streatham Vale Adventure Playground.

It follows substantial cuts in the youth services budget which has seen cuts to the opening hours of one-o-clock clubs staff losing their jobs, and adventure playgrounds running on tiny budgets.

Some local people like Love Streatham have been doing some great work at Streatham Vale Playground, alongside staff and children, stepping in to liven up the youth centre at a time when it is facing great hardship.

But the next stage in the cuts process is that the council in handing over the playgrounds to organisations who are being invited to bid for them. You can get to hear the proposals of the organisations who want to take over these sites if you turn up to the presentation meeting.

This isn't a consultation in which people can reject the bids, and local people won't have a majority say. But at the meeting local people will be asked to choose between the bids and score the presentations. The scores will count for 30% of the total score of the organisation in the selection process.

Posted by Jonathan Bartley at 19:36