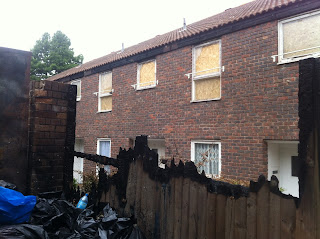 We have been chasing Lambeth Living and Lambeth Council, which has ultimate responsibility, to make the necessary repairs to The Glebe, sheltered housing, on Prentis Road following the fire next door two weeks ago.

A number of windows were cracked and broken and have been boarded up. The guttering was also completely melted, and the fence next door was badly burned and charred.

The residents were able to stay in their homes. But two weeks later their windows are still boarded up and the large pile of melted and twisted guttering is still there outside their doors. A foul burning smell remains in the air as a result. 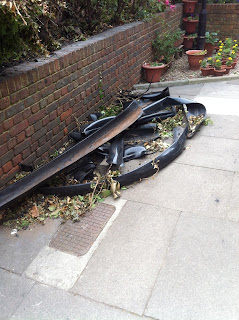 This is simply not good enough for residents in their Eighties and Nineties. Lambeth Council leader Lib Peck was very quick to issue a statement of following the fire, saying:

“We are doing all we can to help and support people in Streatham who’ve been affected by the fire."

The rhetoric has not been matched by action.

Local people will be aware that The Glebe, although in an excellent state of repair apart from the recent fire damage to one section, has been earmarked for demolition by the Council, as they want to redevelop the site.
Posted by Jonathan Bartley at 11:20

Email ThisBlogThis!Share to TwitterShare to FacebookShare to Pinterest
Labels: prentis road, the glebe