Explosion and fire next to the Glebe on Prentis Road 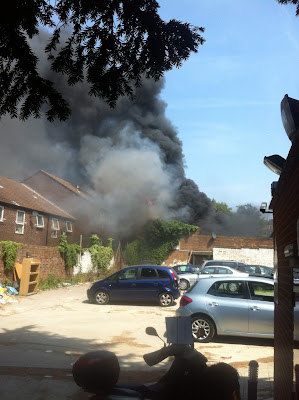 At around 12.20pm today there was an explosion next to The Glebe on Prentis Road, at the back of the shops on Streatham High Road.

Flames were seen going up the back of apartments in The Glebe - which is sheltered housing for 60 residents in their eighties and nineties - with large clouds of black smoke rising around fifty feet.

The fire could be seen raging from the St Leonard's Churchyard (picture shows the view from St Leonard's churchyard across the Andrews car park with Glebe apartments on the left).

It seems that the explosion did not take place in The Glebe itself, but at the back of the sheltered housing, just beyond the wall of the car park behind Andrews Estate agents where there are some sheds. Smoke was also coming out the Polish shop Bartek. 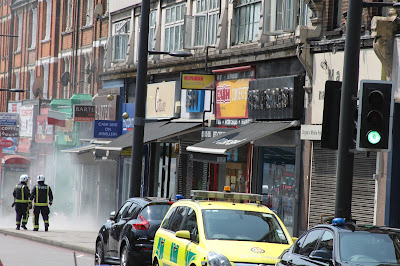 Fire and police services were quickly in attendance, and cordoned off Streatham High Road at the St Leonard's Junction, as well as surrounding roads as far away as Tooting Bec Gardens.

Susan Dench, who is the warden of The Glebe, sent a communication to say that all The Glebe residents seemed to be alright, although one was being treated for shock. They were not initially evacuated, but remained in the communal area while the emergency services attended the incident.

(update 2.07pm) The cause has been suggested to be an explosion of gas canisters. (There was initital speculation that water turned off in the area yesterday afternoon and evening might have contributed to a boiler exploding).

"Some storage sheds behind the shop (which is on Central Parade) caught fire and the blaze spread to the ground floor of the shop. Twenty five residents were evacuated from a care home (sic) on Prentis Road which backs onto the row of shops.

"A man was treated by paramedics from London Ambulance Service for minor burns to his hands, and two others were treated for shock and smoke inhalation respectively.

"Station Manager Martin Corbett, from Clapham fire station, was at the scene. He said:

"Firefighters worked hard in very hot conditions to bring the fire under control. The blaze started in some storage sheds and then spread to part of the ground floor of the shop. The blaze caused a lot of smoke, but fortunately it is now under control."

"Six fire engines from West Norwood, Norbury, Tooting, and Clapham fire stations went to the scene with 35 firefighters and officers. The Brigade was called at 1220 and the fire was under control at 1408."

"The cause of the fire is under investigation."] 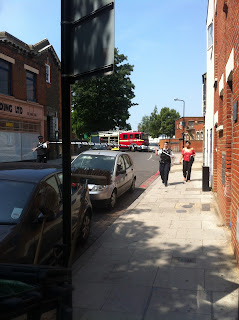 Police began to cordon off Prentis Road after the arrival of the first fire engine, seen here at the entrance to The Glebe on Prentis Road. 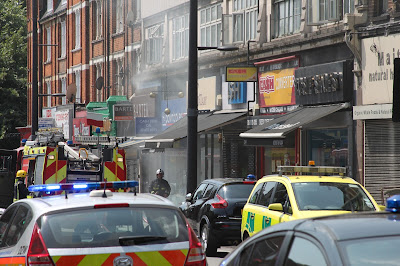 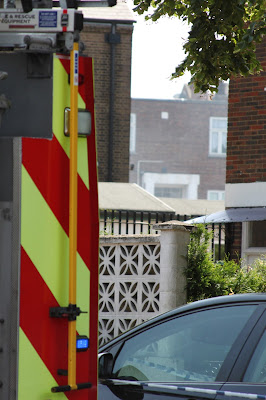 The smoke could be seen from Prentis Road, although The Glebe is set back around 20 metres from the road and the fire was on the far side of The Glebe apartments. 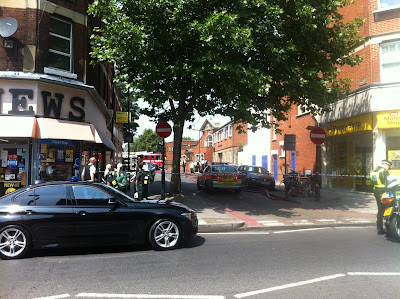 Police gradually extend the cordons out to incorporate Streatham High Road and the surrounding area.
Posted by Jonathan Bartley at 13:48