Review won at junction of Mitcham Lane and Ambleside Avenue 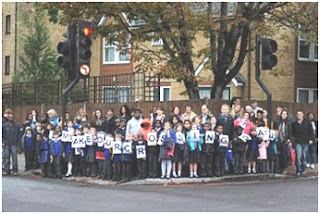 Last year children and parents from St Leonard’s School took part in a demonstration at the corner of Mitcham Lane and Ambleside Avenue. We called on Transport for London (TfL) to look at ways to make the junction safer. This is part of an ongoing campaign at this junction.

There was some press coverage which helped to show TfL the strength of feeling and that local people wanted something done.

We are pleased to report that TfL were in touch with us over Easter. They have now scheduled a full review of the junction. TfL have told us they will be working with cycling, road user and safety organisations to improve the junction as part of its Better Junctions programme.

The review has been scheduled for the summer. TfL will then produce a number of potential options for improvements, which will be considered by a Design Review Group. The ideas will then be developed in more detail for public consultation.

TfL have told us that they “will be looking to improve provision for cyclists and other vulnerable road users, including pedestrians, and pedestrian countdown signals will be considered as part of the process.”

Thank you to everyone who has helped make this happen. We will provide an update when proposals are brought forward for public consultation. In the meantime, if you would like to see more about TfL’s Better Junction’s Programme you can see more here.
Posted by Jonathan Bartley at 09:46