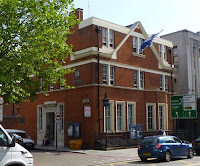 Along with Scott Ainslie, London Assembly Member Jenny Jones and the new leader of the Green Party Natalie Bennett, I attended a meeting last night in Brixton which gave some details of proposed changes to policing in Streatham.

The meeting at Electric Brixton, Brixton Hill, was attended by Deputy Mayor Stephen Greenhalgh and the Met Police’s assistant commissioner Simon Byrne. Organised by the Mayor of London's Office for Policing and Crime (MOPAC) it was a consultation on the draft Police and Crime Plan, and lasted just over an hour. However it left many people's questions unanswered.

We were told that the new plans were being driven by the goal of reducing the police service budget by 20% by 2016 but also to get officers out from behind desks and into the community.

The key points that emerged with regard to Streatham, are that:

1. The counter at Streatham police station will no longer be open 24 hours, but be reduced to just opening during the day. The exact hours would be determined following local consultation, with the possibility of volunteers being used to keep them open for longer.

2. The dedicated ward Safer Neighbourhood Teams will be reduced from 6 people (one sergeant, two constables and three police community support officers - PCSOs) to just one dedicated PC and one PCSO.

This is part of a new policing model which will be introduced from this April, aimed at providing flexibility rather than dedicated bodies in wards. Inspector-led teams will work in local police areas (clusters of wards). Every ward will have a "named sergeant" (but apparently not solely dedicated to the ward so they will be shared). It will just be a PC and PCSO dedicated to each ward, while other PCs and PCSOs work across the whole local police area.

The Brixton Blog suggests the senior police officers gave no assurance to the future of either Community Police Consultative Groups or Safer Neighbourhood Panels. These groups are seen my many as vital to hold the police to account in the borough. However, in the Mayor's Police and Crime Plan, it states:

"A Safer Neighbourhood Board will be established in every borough by 2014... These Boards, supported by MOPAC, will establish local policing and crime priorities and fulfill a range of important functions, including monitoring public complaints against the police and community confidence in their area, and ensuring all wards have a ward panel in place."

The 2012 Green Party London manifesto pledged to resist police cuts. As more details emerge we will update you. In the meantime you can see the Mayor's Draft Police and Crime plan in full here

Posted by Jonathan Bartley at 12:42