Questions to London mayor about air quality in Streatham 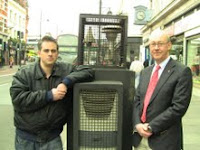 There has been a lot of local concern in Streatham about air quality, particularly with so much traffic on Streatham High Road.

Air pollution was identified in the Streatham Masterplan as one of the big issues that needed to be tackled. There is also an air quality monitor on Streatham Green.

According to the London Mayor's own figures, air pollution in London causes around 4.600 premature deaths each year in London. I have also measured the pollution on Lambeth's residential streets and found it to be a levels close to 90% of the pollution on the main roads like the A23. Many of Lambeth's schools are also right next to its busiest streets.

"We monitor air quality throughout the borough and we publish the results annually".


However, with no notice, Lambeth council suddenly withdrew from the London Air Quality Network in April last year, so the data is no longer publicly available.

We also discovered that Lambeth Council has not produced an annual report in air quality since 2009.

Green London Assembly member Jenny Jones is therefore going to raise a couple of questions with the Mayor of London about whether the council has appointed any other service provider for the maintenance of its air quality monitoring stations and data ratification services. She will also ask about why Lambeth hasn't produced an annual air quality report for 3 years.

I'll post an update here when we get a response.

Posted by Jonathan Bartley at 18:35