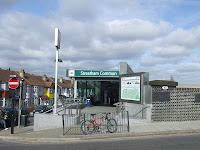 There will be a public meeting on Thursday night about the platform extension works at Streatham Common station, which look as if they will cause traffic chaos. Local businesses are also expressing concern about the impact with Streatham Vale Farmer's market already a casualty. A number of local residents have also contacted me expressing their own concerns.

The work started in late September to allow the station to take trains with up to ten carriages. The works require replacement of the railway bridge and local people have been told that this will mean a partial closure of Greyhound Lane from 24 September to 28 October.

This will be followed by a full closure of Greyhound Lane in the area around the bridge from 3 November to 29 April 2013 with more closures thereafter for utilities to reinstate services over the bridge, duration depending on progress.

Network Rail have arranged the public meeting for residents affected by the platform extension works and the closure of the bridge at 7.00pm on Thursday 4th October at Granton Primary School, Granton Road, SW16 5AN. Officers from Lambeth council will also be in attendance, and it is hoped, a representative from Transport for London.

Posted by Jonathan Bartley at 16:36