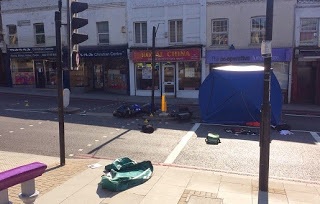 News reaches us that Transport for London have rejected all proposals for a new pedestrian crossing near St Leonard's Junction - site of numerous serious accidents. Two people have been killed and 39 injured - five seriously - in the last five years.


At an exhibition in Streatham Library last November TfL displayed five options for a new crossing at the junction - where Streatham High Road meets Tooting Bec Gardens and Mitcham Lane outside St Leonard's Church. It is is notoriously dangerous for pedestrians, with currently no safe crossing place as it enters "the dip" down towards Streatham station.

But in a letter sent to local MP Chuka Umunna in April - today forwarded to the Safer A23 in Streatham Campaign - TfL writes:

"Traffic modelling unfortunately shows the proposals discussed at the exhibition are not currently viable, particularly in the weekday PM peak hour that was assessed. The proposals were likely to lead to increased congestion beyond an acceptable level based on the current level of traffic demand. This was a point that TfL made at the time of the exhibition. We need to mitigate for the delays for traffic, including buses, created by the potential introduction of any proposals, including the effects on pedestrians at adjacent crossings.

"In order to address this, we need to investigate a larger area of Streatham High Road and consider complementary measures so that the corridor can work reliably for all of its users.

"Our collision data over the last 10 years for this junction does not show a significant number of collisions compared to the London average. As such, we are looking at these wider measures, but this will involve a longer timescale than the programme communicated previously.

"Some proposals, which were not presented at the exhibition, have been designed to assist bus reliability. We intend to discuss these and other findings with Lambeth Council officers shortly to determine a way forward."


It is deeply disappointing that TfL continues to place a higher priority on traffic flow than on pedestrian safety in the heart of Streatham. The diffulty of crossing the High Road near this busy junction has been powerfully highlighted in this BBC news report.


The Green Party locally will continue with its long-standing campaign, with challenges over the accident data TfL is using in its assessment of the junction safety. 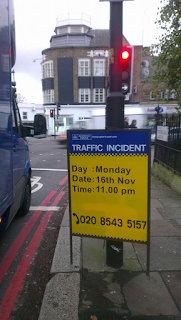